Why All People See Eyebrow Pencil as a Magic Tool

Imagine a person without eyebrows, are they look pale (as the picture shows)? Yes, so, you know how important to own a nice eyebrow.

However, it always is eliminated by water or sweat, you look bad. Now, there are options for an eyebrow pencil that is waterproof and color-developing to avoid sweat and rain. It has a very gentle touch, long-lasting color development, and is waterproof, making the makeup more three-dimensional.

An eyebrow pencil has been widely used, the following perfectly explain why people can't do without it. Let's dive in. 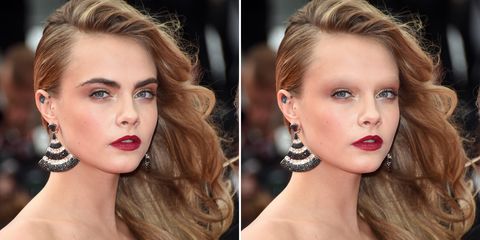 Why all people see eyebrow pencil as a magic tool

Eyebrows have a great influence on a person's temperament and mental state. A pair of beautiful eyebrows can change a person's appearance and aura.

Eyebrow pencils can not only be used to draw eyebrows to make the whole person better, but also have other uses. If your travel is not allowed to carry too much, just bring an eyebrow pencil. Because it can be used as:

Consequently, you will find that many bloggers can easily get an exquisite makeup look only using one makeup prop or two, and the likes and collections of such videos are very high. It shows that the blogger is skilled in makeup while leaving the cost of other cosmetics.

How does the eyebrow pencil draw natural eyebrows?

Turn the pen tip 45°, and draw the upper part of the eyebrows with a 3mm line. The pen is lighter and the line is blurred.

Start coloring, fill at the end of the eyebrows with a 1mm line in the direction of the arrow.

Near the upper edge of the remaining brow, apply a few strokes with a 5mm wide surface, fill in a little, and make the color lighter and blurry. If the brows are unnaturally blurred, use the spiral brush that comes with the eyebrow pencil to faint them.

Finally, brush the eyebrow cream and it is done if you are proficient, it is very fast.

Is the waterproof eyebrow pencil not good at removing makeup?

This is determined by brand and quality. If the same brand, the waterproof eyebrow pencil is more expensive than an ordinary eyebrow pencil.

Is it necessary to buy expensive eyebrow pencils?

Does the waterproof eyebrow pencil have a shelf life?

Which eyebrow pencil waterproof supplier should I trust?

One Dollar also is an eyebrow pencil waterproof factory, has a professional team, and cooperated with lots of well-known people in this industry. Whether it is eye makeup products or other facial products, we provide customers with a variety of choices and professional advice, and we have established a long-term partnership.